Our previous blog described Illinois home rule power and authority for municipalities and local units of government. We continue with our post-primary blog series with another topic of local authority, the city of Chicago’s Aldermanic Menu Money Program. The program gives Chicago aldermen power and authority to allocate funds used for capital improvement projects in their ward.

The city of Chicago’s Capital Improvement Program (CIP) was created roughly twenty years ago via ordinance signed by then mayor Richard M. Daley. The program provides each alderman from the city’s 50 wards with a specific amount of money to be used for capital improvement projects, such as sidewalk repairs, fixing street lights, filling potholes etc. Each alderman receives the same amount of money, as allocated via the city’s FY budget. Additionally, the actual spending of such funds on projects is at discretion of the ward’s alderman.

Every year, the city allocates a specific amount of money to CIP where those funds are divided equally among the city’s 50 wards. For the city’s 2018 FY budget, the net total allocated to CIP was $65 million with each ward receiving  $1.32 million. This amount has been roughly the same since at least FY 2010. Additionally, about 7% of the CPI funds are allocated towards the menu money program.

While capital improvement projects may vary from ward to ward, common allocation of funds normally include the following:

Figure 1 below illustrates the percentage spent by category from FY 2010 to 2014. About 74% of the money allocated between FY 2010 to 2014 was spent on improving streets and sidewalks and 20% on lighting projects over the course of the five fiscal years. 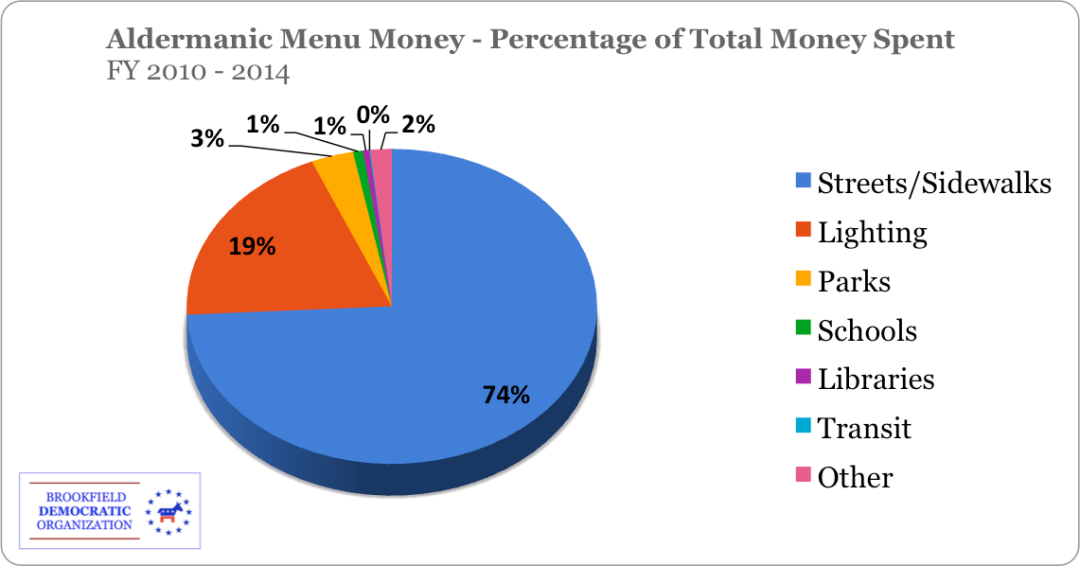 A closer look at spending indicates that aldermen take full advantage of the program, leaving little left to be spent. Fiscal year 2015 saw aldermen spending 5 million more on streets/sidewalks and about $3 million less on lighting then the previous trends. However, FY 2016 spending resembled FY 2010 to 2014 averages.

The city allocates the same amount of money to each ward regardless of its size, raising questions on the program’s efficiency. In April 2017, the Office of the Inspector General publish an audit of the program and recommended that the program instead allocate funds based on project need. The report also found the larger the ward the greater need for funds. These findings have prompt some to argue that the program allocate funds based on the geographic size of the ward to mitigate funding disparities. More importantly, the audit recommended that money be dispersed via the Chicago Department of Transportation rather than providing aldermen with the $1.32 million allowance.

On the other hand, the current program’s local control allows money to be spent by those who best know the needs of their ward, rather than extending a tedious bureaucratic process to approve projects and allocate funds. The current program also provides transparency. For example, if a business owner or concerned resident within the ward would like to inquire about a nearby pothole, they do not have to navigate through the bureaucratic channels of city government, but just have to contact the ward office of their alderman.

The Menu Money Program provides aldermen with the authority to spend funds on infrastructure projects in their ward as needed, normally with the bulk of money being spent on improving sidewalks and streets. While there are concerns that funds could be allocated more efficiency, the current program also mitigates the bureaucratic process by providing local control to alderman. Perhaps a balance for reform will be struck in the future.